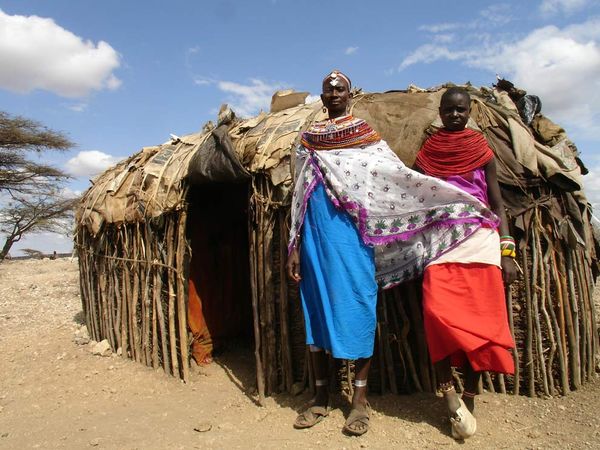 The pastoral Masai occupy the Narok and Kajiado districts of Kenya, and share the Olmaa language from which their name derives within Kenya with the Samburu and Ilchamus, and across the border in Tanzania with the Arusha and Baraguyu.

A fusion of Nilotic and Cushitic people, effected perhaps a millennium ago north-west of Lake Turkana, the Masai ascended the escarpment out of the Kerio Valley to spread in the ensuing centuries across the fertile grasslands of the Rift Valley.

A century ago, they had established a reputation as powerful and ferocious people; their warrior bands raided hundreds of miles into neighbouring territories to capture the cattle they coveted and to demand tribute from the trade caravans.

In the closing years of the 19th. Century, however, the Masai herds were decimated by rinderpest and drought, and the once united people devastated by smallpox and inter-section strife.   Through treaties in 1904 and 1911, the European Government moved the Masai out of their northern grazing lands of Laikipia.

The basic economic and social unit is the enkang, a semi-permanent settlement of several families pasturing their stock together,  perhaps ten to twenty huts surrounded by a thorn or leleshua fence into which the livestock are driven at night.